I’m writing this to share additional information with you. Information that makes the case for you supporting the Goochland County Republican Committee’s September 17th reception at the Hardywood Park West Creek Tap Room.

“In a republic people get the leaders they deserve.”

It’s not surprising to me that many of our current Goochland leaders have been endorsed by the Goochland County Republican Committee. Those leaders believe in the Republican Creed.

If you’re not familiar with that six-point statement, Here’s a link to the Goochland Republican Creed for you to read.

But that doesn’t mean it’s easy to implement.

Think about it. The effective leadership we have in our Goochland government isn’t due to dumb luck. It’s because the voters have elected Republicans to the Board of Supervisors, to the School Board, as our Treasurer, and as our Commonwealth’s Attorney. The voters elected candidates who believe in a policy of limited government, low taxes and transparent government.

But getting those candidates elected takes work – and money. Resources are needed so we can get that Republican message across.

“All politics is local”

Tip O’Neill was a Democrat, but I think he was right when he made that observation.

I know national and state politics get the headlines (and tweets), but in my opinion, the real work of government takes place here at the local level – in Goochland County.

And I think we have a lot to be proud of.

Your invitation to the September 17th reception is to help the GOOCHLAND County Republican Committee have an operating budget that can focus on Goochland County.

All of the money raised at this reception will go to Goochland Republican efforts — and I mean Goochland efforts only. National and Virginia candidates or organizations will have to send out their own fund raising requests.

I make no apology for this letter and the September 17th Reception being 100% focused on Goochland’s Republican Committee’s activities. Goochland is where the rubber hits the road for most of the decisions that have the biggest impact on residents’ lives and on Goochland businesses.

The good news is that this September 17th Reception is not a big “ask”. $500 will sponsor a table and provide six tickets; it’s $90 for a couple to attend; it’s $50 if you want to come by yourself.

The reception is at the Hardywood Park Tap Room in West Creek. Hardywood is a wonderful venue that showcases just one of the economic successes Goochland is achieving.

Each ticket provides the holder admission and a flight of four sampler beers on tap that night. Food trucks will be on-site to provide a variety of food options.

And there won’t be any speeches. (Really!)

We’re Different. In Goochland, Republicans work with Democrats and Independents.

There may be a loss of civility in political discourse at the national and state level, but in Goochland, we mind our manners.

Now, Republicans and Democrats do have different positions on many issues. (Naturally, we think the Democrats are misguided in many of their positions…but that’s a topic for another letter). Those differences notwithstanding, we also believe all of us have a love for our country…and for Goochland County.

Consider how Republicans and Democrats worked together just this past year. Goochland’s Democrats, Republicans and Tea Party members jointly sponsored General Assembly candidate forums at the high school in 2017. Equal time was provided to all the candidates running so they could share their positions. You don’t see that kind of fair play happening in Washington or Richmond.

As one report on the joint-sponsorship forums stated: “It was nice to see Goochlanders of all political stripes gather to hear the candidates running for office make their pitch.”

And for decades, Republicans and Democrats in Goochland have had workers at the polls on Election Day. Those poll workers always have friendly conversations with each other, frequently share snacks, and sometimes even share umbrellas.

Goochland Republicans know that while politics are important, helping a neighbor who has a dead battery, or that working together to bringing snacks to a PTA meeting or to the volunteer fire station transcends whatever bumper sticker is on someone’s car.

Your support of the September 17th reception will help Goochland Republicans keep that type of civil discourse alive and well.

Goochland is a pretty good place to live and do business these days. Taxes are low. The schools rank among the best, not just in the region, but across Virginia. Goochland County government is transparent, efficient, and effective.
It wasn’t always like that. In 2011, Goochland was facing possible default on its long-term bonds; the schools were in management disarray, county utility checks had been misplaced in desk drawers for months at a time. And to top it off, the previous county treasurer had been convicted of embezzling county funds.
But after the “clean sweep” election in November 2011, Goochland has achieved a level of good government that is the envy of Virginia.
In that 2011 election, five Republicans were elected to the Board of Supervisors; five School Board candidates endorsed by the Goochland Republican Committee were elected; a new Republican Treasurer was elected; a Republican Commonwealth’s Attorney was elected.

That one election brought BIG changes to Goochland.

“Goochland County is a national leader in taxpayer friendly policies,” said Jon Russell, National Director of The American City County Exchange. “Other counties need to look at their model of governance and replicate their success.”

We’re asking you for your help.
What will we do with the money we raise?

It’s no accident that the 2011 clean sweep took place when the Goochland County Republican Committee was able to recruit and support locally-focused candidates: candidates who put taxpayers and policy first without grandstanding.
We aren’t trying to raise hundreds of thousands of dollars with the September 17th reception.

And that is money is not for national campaigns. It’s not for Virginia campaigns.

The money you contribute is for Goochland.

The money raised from the table you sponsor or from the tickets you purchase will allow the Goochland County Republican Committee to do four important things:

Candidate recruitment. We believe elected office is not a life-time job. When current office holders retire, it’s important that the Goochland County Republican Committee be able to recruit candidates who believe in the Republican Creed; candidates who are public servants (not public “officials”).

Technology development. We have a website, but like every website, it could be enhanced. We are a volunteer committee – there’s no paid staff. When we do need to tap into technical expertise, pay for web hosting or email services, we need the funds to cover those costs.

Message outreach and voter education. On Election Day, we distribute sample ballots. Some election years there are constitutional amendments or Bond referendums. Every four years Goochland elects two Soil and Water Conservation Directors (we found out just about everyone needs information on that office…)

Having funds to help with outreach and voter education allows Goochland voters to make informed decisions at the polls on all of the issues and candidates that are on the ballot..

Policy oversight. The Goochland Republican Creed is only ninety-five words long. But they are important words.

The Goochland County Republican Committee believes that candidates in Goochland who run as Republicans or who run with the Committee’s endorsement should understand the beliefs the Creed states, and agree with the principles it sets forth.

Our goal is to recruit candidates – and watch the policies those elected candidates implement – so the result is that Goochland enjoys consistent, steady governance.

Make your decision of support today.
Go to this link to purchase tickets or to simply make a donation

I know you’re busy, and that’s why I’m hoping you will support the GCRC now, while you’re thinking about it.

Your support is important and appreciated.

I invite you to be one of the 228 people who recognize the benefits that Goochland enjoys from the Renaissance that started in 2011.

I hope you will be part of the team that keeps this Goochland Renaissance going, and that you’ll respond to my invitation today.

Five minutes and you’re done. But the impact you make will last for years.

Come be a part of continuing the Goochland Renaissance on September 17th.

Thanks in advance for your support. 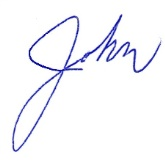 I promised you that there won’t be any speeches, but we will have a brief seven minute program at 7:15 to thank you for attending, and to give recognition to Goochland Supervisor Ned S. Creasey.

Goochland lost a beacon of light to public service with Ned’s passing in March. It’s fitting that we recognize Ned as a catalyst to the open government we enjoy in Goochland today. As Ned noted in a 2012 newspaper interview:

“Goochland is a jewel with many facets. We’ve got to get the right people to polish those facets.”

I hope to see you on September 17th.