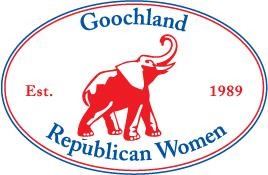 The Goochland Republican Women (GRW) is an independent political organization which supports the efforts of Republican candidates and various issues at the local, state and national level.

The GRW meets the first Friday of each month, except July, at a private home.  We begin with a lunch 11:30 a.m., provided voluntarily by members.  The meeting begins at noon.  The speaker presents the program for that day.  The business meeting begins immediately after the program.

Meeting programs are intended to educate members on current issues, particularly in Goochland County, and to inspire members to use their knowledge to influence improvements to our community and to assist in the election of candidates of good character, who will faithfully represent the citizens who elected them.

Annual dues of $30.00 are payable when joining and due each January thereafter.

GRW members have served or now serve on the Board of Supervisors, on the School Board, as Constitutional Officers, on the Electoral Board, on various Commissions and Committees of the County and as Election Officers and Observers.  The GRW supports the efforts of the Goochland Republican Committee.

Goochland Republican Women are making a difference in Goochland County and in the Commonwealth of Virginia.  We welcome all women who also want to make a difference through a wonderful association of like-minded women.

Please contact drewridge24@aol.com for directions to the meeting location.

Usually hold one fundraiser each year to raise money for local and state candidates.  (Federal law does not allow direct donations from Republican groups to federal level candidates).